Written by: Food Bank of Northern Nevada on March 9, 2020
Categorized under: Events

This year, 13 teams will use nearly 30,000 cans to masterfully create canned food structures that will leave you wondering “HOW did they do that?!”

One very important and highly sought award will be up to YOU – the People’s Choice Award will be presented to the team with the most votes cast during the week-long voting campaign.

It all begins with a 12-hour building day on Wednesday, March 11.  Structures will be up for viewing at Meadowood Mall through Sunday, March 15. Viewers can vote for their favorite sculpture at the Guest Services desk during regular hours Wednesday-Sunday. Online voting opens at 8am on Wednesday and closes at 12pm Tuesday, March 17. Every vote costs $1, with all proceeds from voting benefiting the Food Bank of Northern Nevada.

Already have a favorite?
Cast your vote below

Team 1: CustomInk | Stomping Out Hunger Like Mario Stomps Out Goomba!

Let’s stomp out hunger like Mario this year. A fact about Goombas and Mario: Goombas are an enemy in the Mario series. They are short brown mushroom shaped enemies that are easily killed by jumping on their head. Goombas are physically weak and are not much of a threat to Mario, since a single stomp usually defeats them. With hard work and dedication as a team we can come together just like Mario and stomp out hunger too! 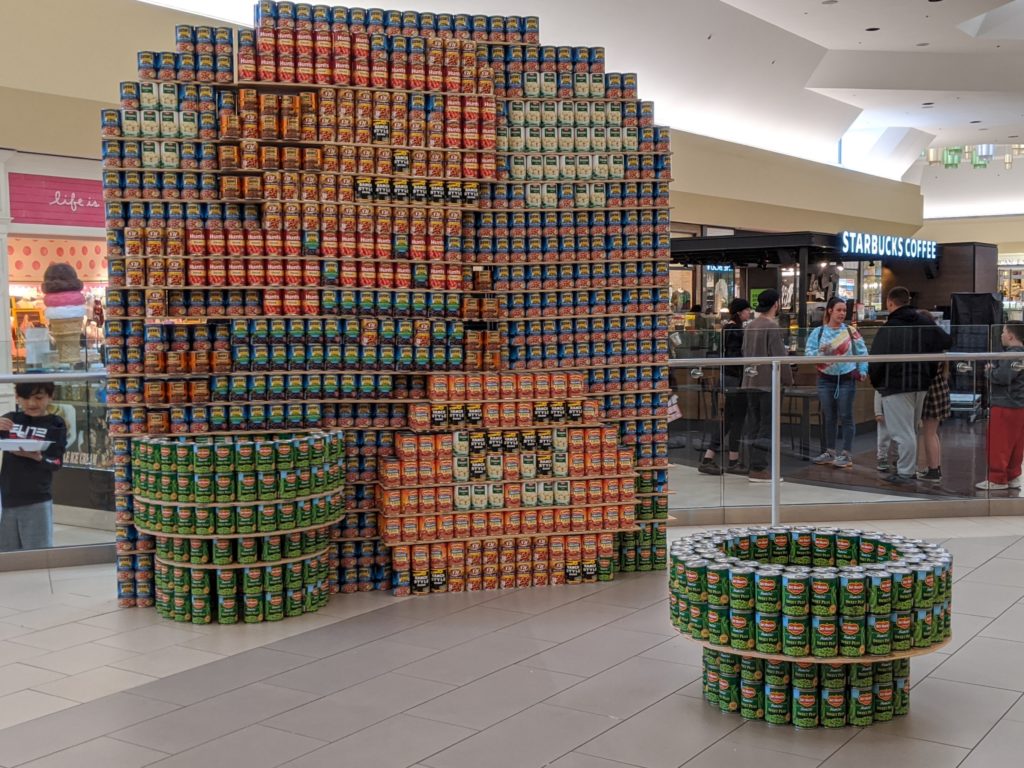 Team 2: Depoali Middle School | Transport Hunger Out of this World

Wouldn’t it be KOOL if there was no more hunger in this world? The students of Kendyl Depoali Middle School, with the help of some alien friends, are working on loading hunger onto a UFO and sending it to a galaxy far, far away. Let’s transport hunger out of this world! 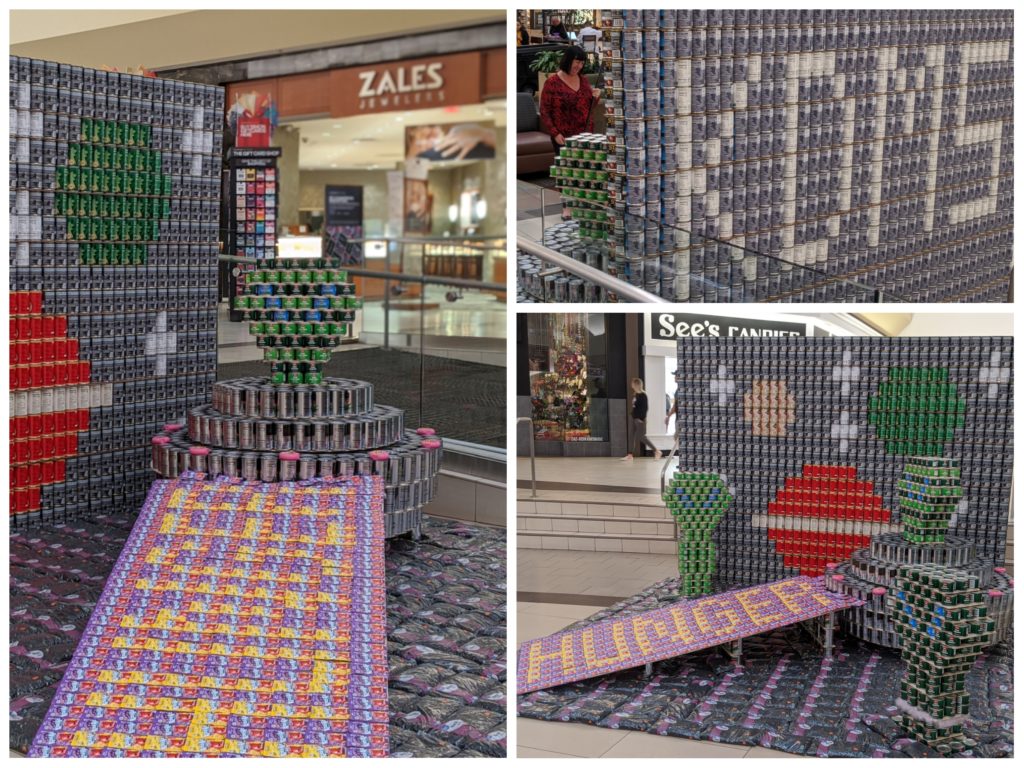 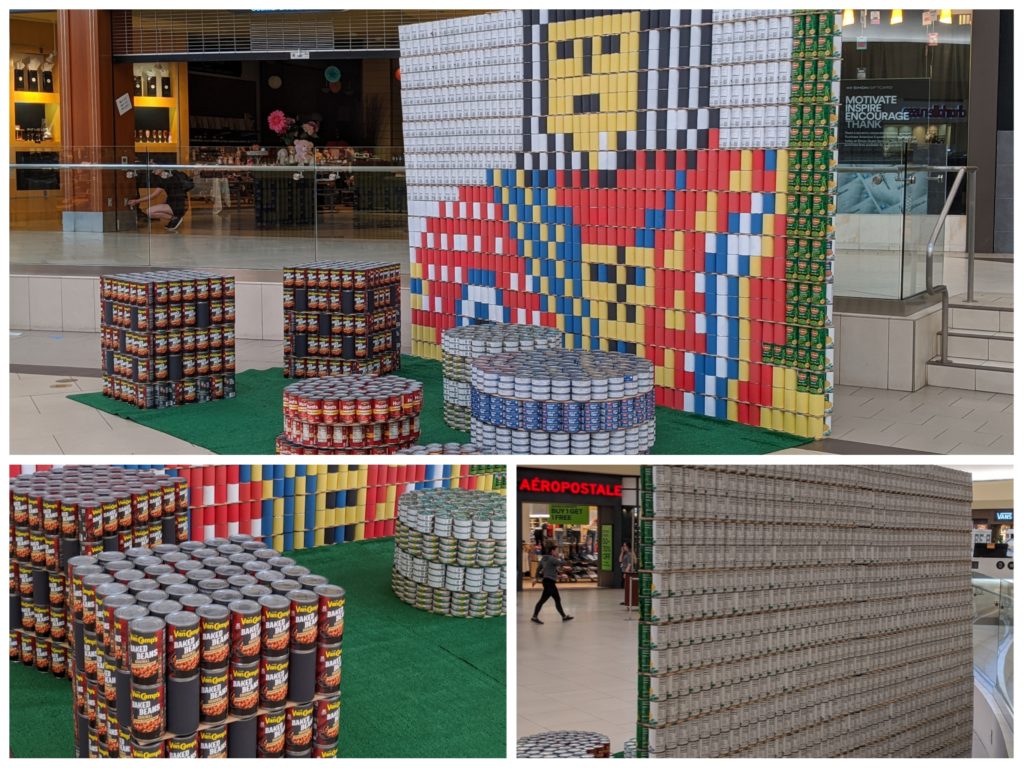 The AT&T Pioneers have created the wind-up to aid hunger in our community the Ameri-Can way. Just like this sculpture, food insecurities are supported from the ground up. Volunteerism is executed with a strong foundation, evolution of progress and strategic planning to best help those in need.

Red, white and blue are a display of American pride which aligns with the core Pioneer value of charity. The creation of these colorful can labels reveals the demand to feed our neighbors in need. And the collaborative effort of our volunteers to build this design exhibits the Pioneer legacy. 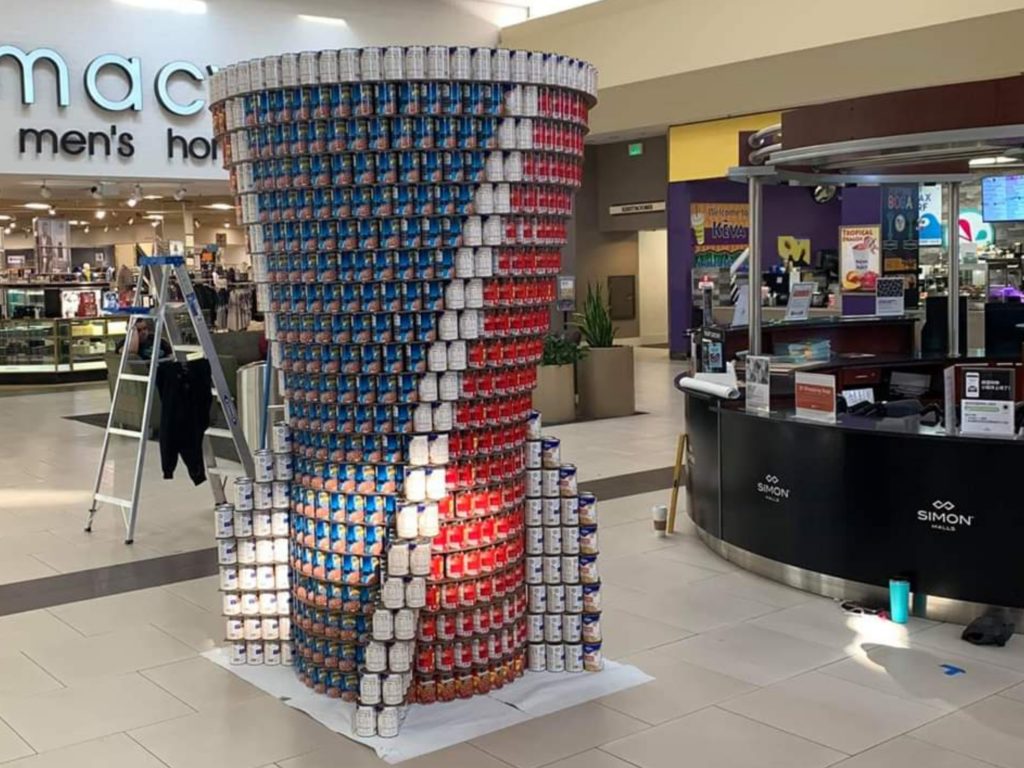 We’ve set the scene of a lone Porg sitting in the grass on the cliffs of Ahch-To, made here out of Del Monte Sweet Peas and S&W Chili Beans. The porg’s coat is made from Cambell’s soups, with a nod to our theme in using Pasta and Chicken Soup – Star Wars Shapes for his dark feathers. The orange crest around his Oreo Pie Crust eyes denotes him as a male and is created here using Market Essentials Vegetable Beef Soup. Jack Links Meat Stick forms the downturned mouth that gives all Porgs their sad appearance. 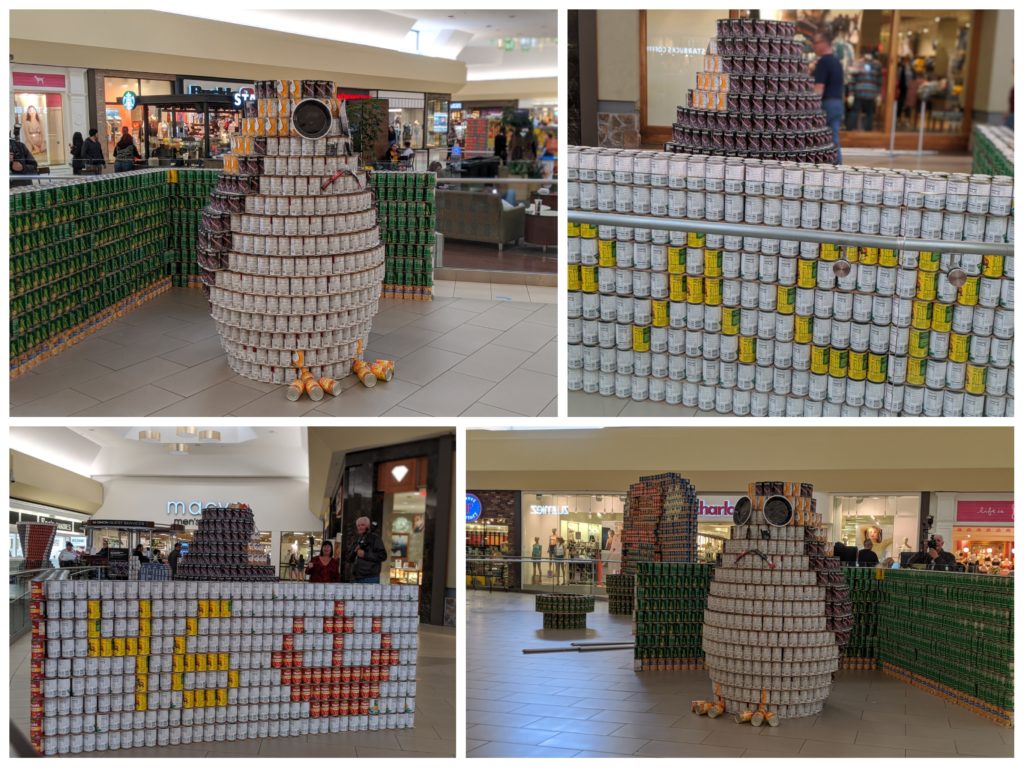 When you think of Reno, what comes to your mind? The small town feel of the Biggest Little City? What about the beautiful nature that surrounds you when you’re here? When we think of Reno, we envision the green, pink, and white glow of Downtown that can be seen from miles away. The Reno Skyline is both mesmerizing in real life as well as made from cans. Multiple trips to the store were made in order to find the perfect can colors for this design. The bright pink Eldorado is made with strawberry pie filling. The Silver Legacy made with spinach. Circus Circus made from black beans. 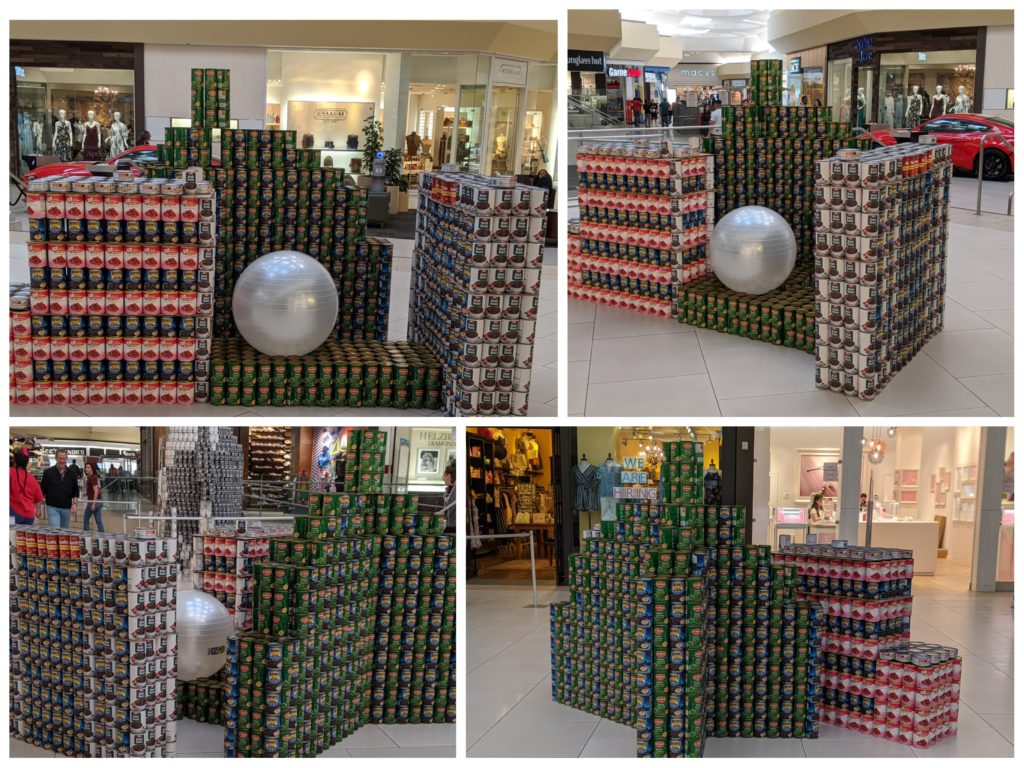 Nothing is more disappointing than dropping your ice-cold ice cream cone onto the ground on a hot summer day… Well, with the exception of hunger! While dropping your ice cream treat on the ground is an uncontrollable accident, food insecurity is something we as a community should control… and ELIMINATE! 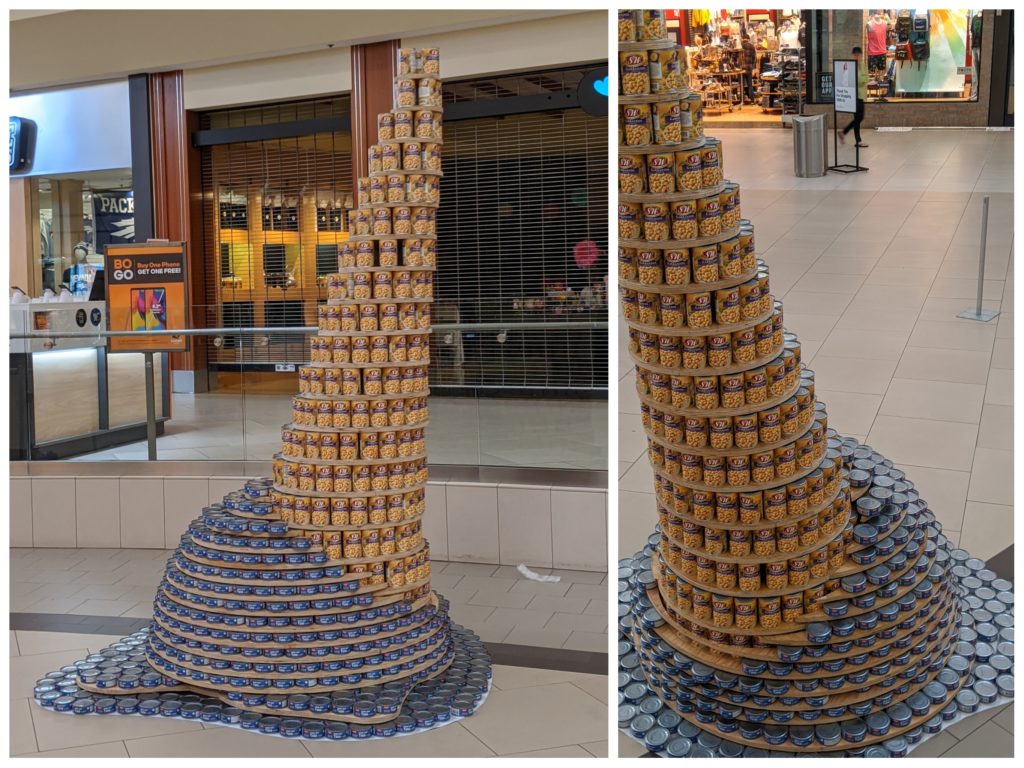 At the Food Bank of Northern Nevada, we love Super Foods.   We also love the idea of a Super ‘Cado fighting hunger and making a difference in our community!   We take inspiration from this caped, masked super avocado who is poised to fly through the city and rush nutritious foods to every man, woman, child, senior and veteran who faces hunger on a daily basis. 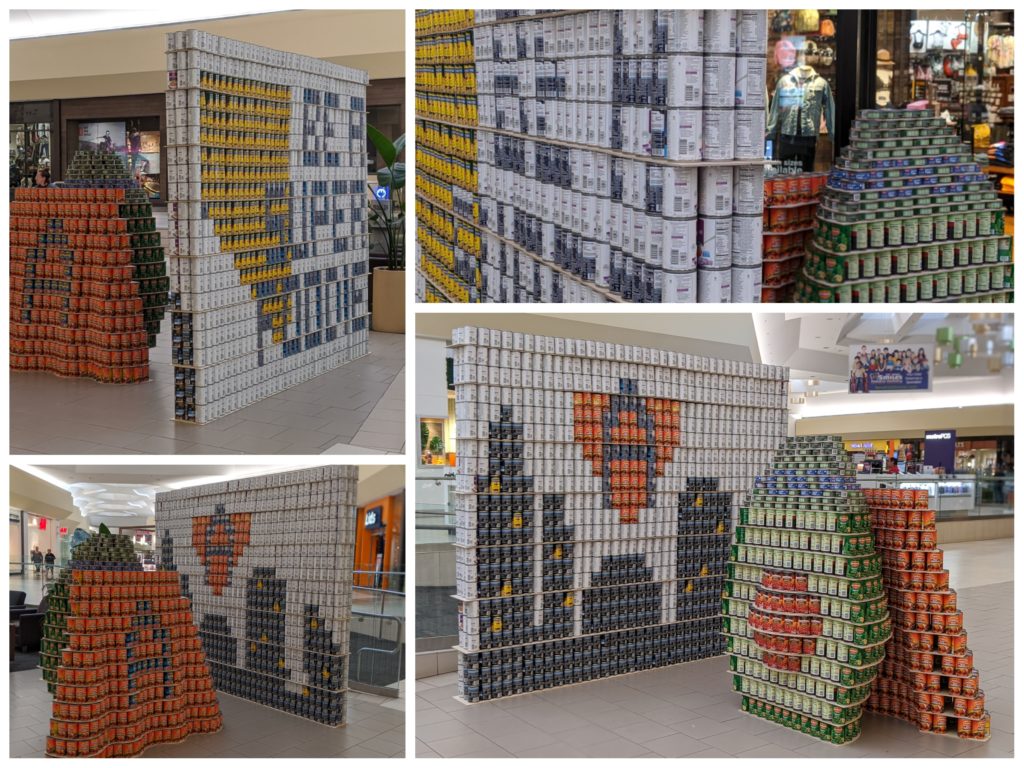 Our structure’s goal is to bring awareness to the importance of suicide prevention.  As students at Swope Middle School, we recognize that teen suicide is an issue in our community and across the nation.  According to the New York Times, teen suicide is the second leading cause of death for people between the ages of 10 and 24.  Suicide attempts have quadrupled over the last six years.

The phrases displayed on our structure can be used to make a connection, validate feelings, engage conversation and show people who are hurting that they matter.

We have made an orca whale from the Netflix motion picture Blackfish. The orca is jumping out of the water to represent freedom. We have chosen this particular motion picture because Blackfish is about orcas in captivity and how badly they are treated. For example, in the wild these whales live up to 100 years, but in captivity they live up to 40 years at most.  Fortunately, SeaWorld has ceased all orca shows due to increased criticism. To celebrate this change and to draw attention to all animals in captivity, we decided to build this design. 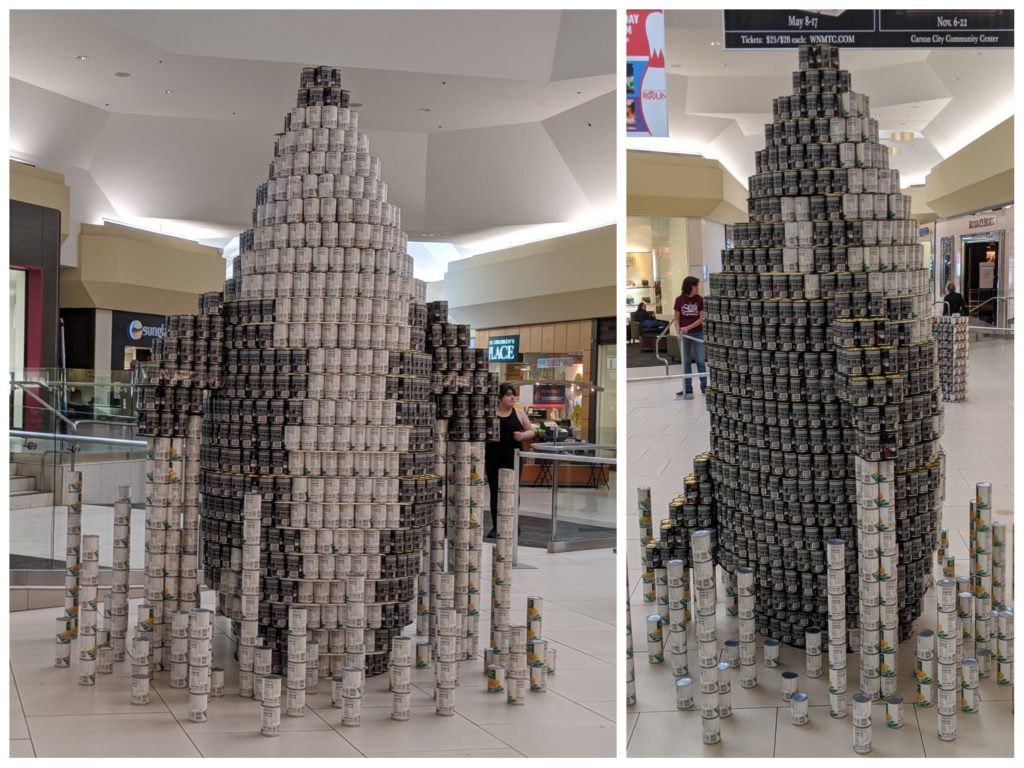 We at Sage Ridge School have paid homage to our arachnid mascot, Spike the scorpion. From stinger to pincers, Spike is a protein-rich meal of beans and chili. He stands on a desert floor of garbanzo grains of sand, and what better way to portray a clear desert sky than with New England style clam chowder?  We chose to balance our meal with healthy greens while also bringing dimension to the scene in the standing cacti, rooted in brown rice sand. 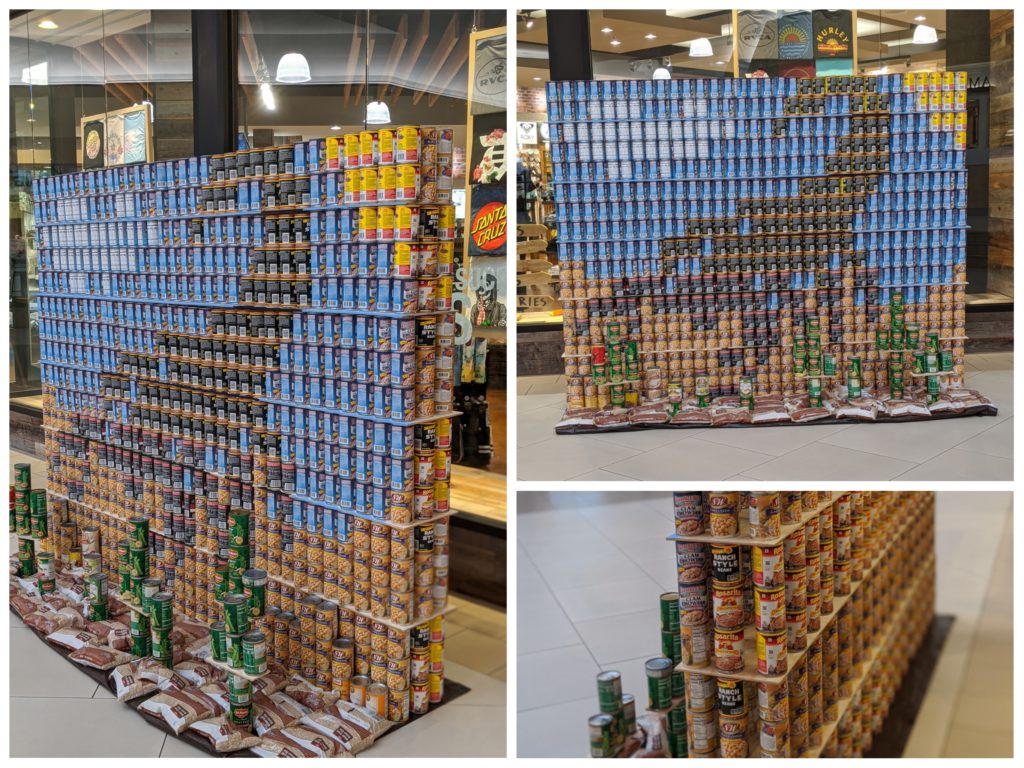 The overarching mission of the Food Bank of Northern Nevada is to feed the hungry today and solve hunger for tomorrow.  Working together, we CAN feed our community with healthy food for every person, every day!  The partnerships in the Biggest Little City and beyond help us serve 91,000 people each month, half of whom are children and seniors.

Children who do not receive proper nutrition have serious additional problems that affect their lives. Children who are hungry are sick more often, struggle in school, and hungry children under 5 can experience developmental delays that stay with them throughout their lives.

A senior living at the poverty level has a monthly income of $1,050 or less.  People who have worked their entire lives are juggling increased housing, medical, and transportation expenses and struggle to put food on the table. 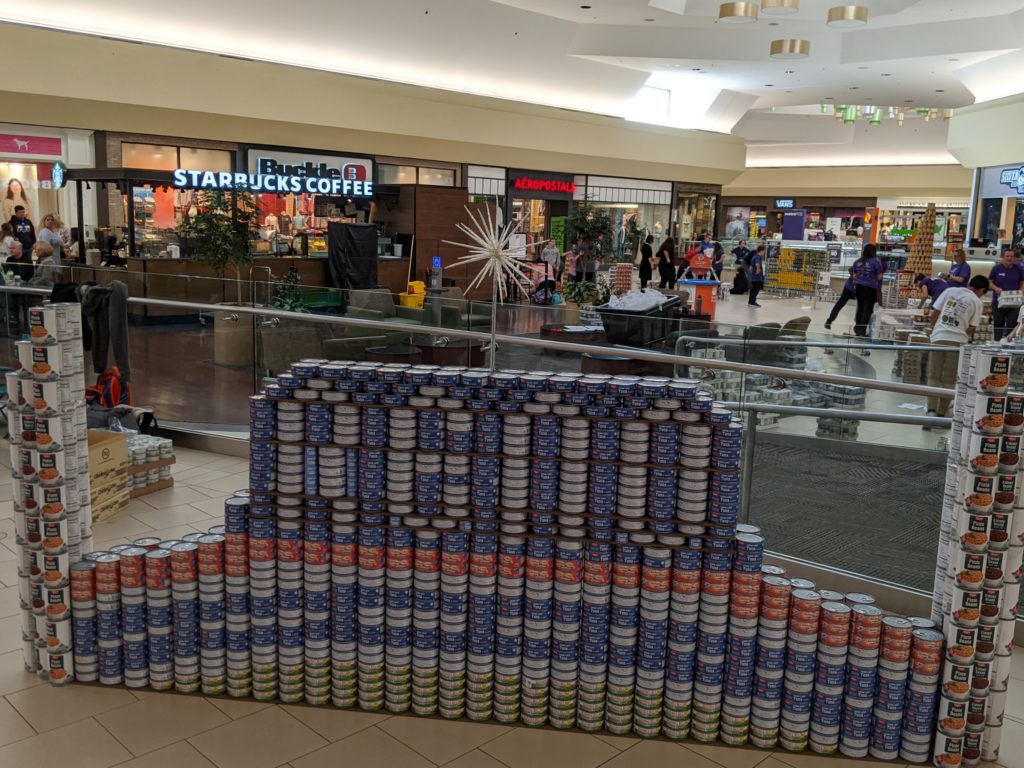 Team 13: Pine Middle School STEM | You’ve CAT to Be KITTEN Me; Hunger Is Still a Thing!

We wanted to “Switch” it up a little to get the attention of younger audiences so they will be more active in helping feed hungry people. Our model of a Nintendo Switch shows a cat on the main screen of the gaming console with the controllers on the ground in front of the main screen.

We used Hunt’s Tomato cans for the red in the apples of the tree as well as the red controller. The sky, cat’s eyes, and the blue controller are made with Bushes Black Beans. The dark green leaves of the tree are made with Del Monte Fresh Cut Spinach, while the lighter green grass is made with WinCo Green Beans. The tree trunk is shown in brown by using S&W White Beans. The blazing sun consist of S&W Garbanzo Chickpeas. Our central character “the CAT” was brought to life with Del Monte Sliced Peaches. To create the buttons, and joy stick on the controller and the boarder of the screen we used delicious WinCo Black Beans. 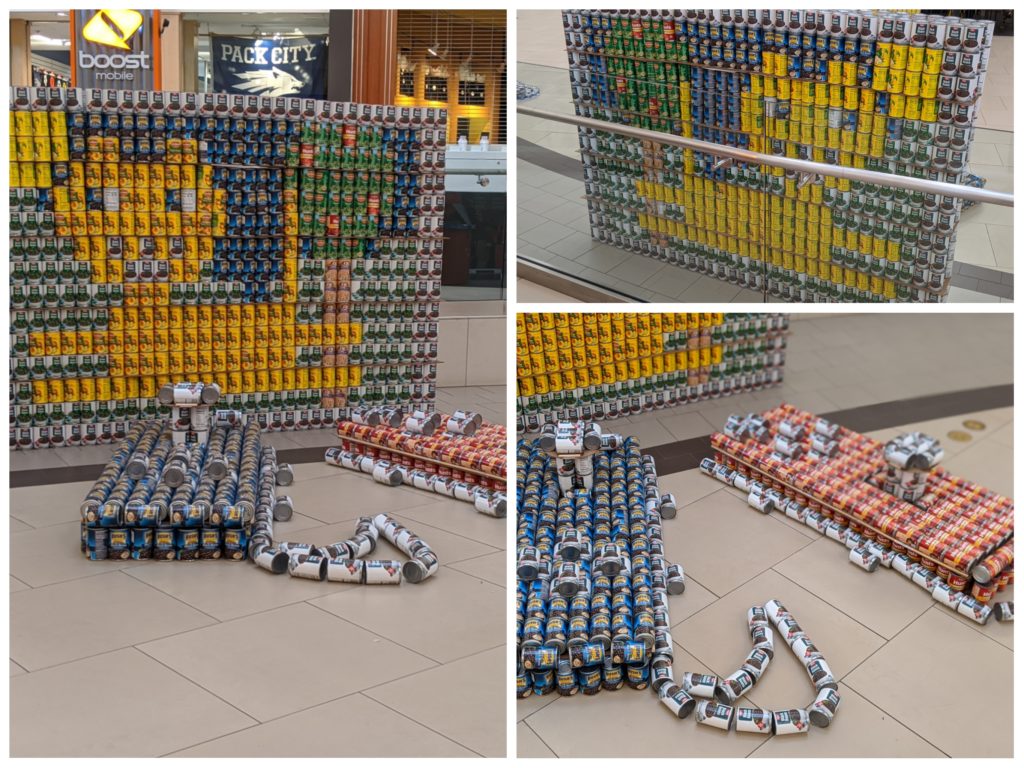 Voting has ended for the 2020 CANstruction Reno competition.